Start a Wiki
Alms Pouch is a short traditionally-animated film that introduces the character of Martha Parker, a homeless woman. The film was animated completely in Adobe Photoshop and was showcased at the 2015 Pencil Mileage Club Film Festival.

The film opens with Martha Parker, a homeless woman, sitting on a bench and staring at a picture of her long-lost husband, Walter Parker. She puts the locket into her tiny change purse when a creepy and sharp hand grabs her thigh. She looks up to see that Willie Swipe is now sitting next to her and tries to advance on her. She is extremely uncomfortable with this, but as she backs up, Willie grabs her change purse and locket. Throwing her off, she then notices a wanted poster for Willie, who starts to run off.

Willie laughs as he runs off, but trips over a crack in the sidewalk. Mad, Martha hoists her frail body up and treads towards him. Despite her slow speed, she always is right behind Willie, no matter how fast he runs.

Not paying attention, Willie slides right into a lake, drenching him in water. Martha holds out her hand, and Willie reluctantly gives back the stolen goods. As Martha walks away, a police officer gives Willie Swipe a ticket for diving into a no-swimming lake.

Early in 2014, during an Introduction to Illustration, one of the assignments was creating an editorial illustration for an assigned article about the health benefits of owning a pet. After sorting through several illustration ideas, including a now-infamous sketch of a man and a dog French kissing, a watercolor illustration of an old homeless woman hugging a dog on a bench was selected as the final piece.

Early in the fall of 2014, As part of an Animation Pre-Production class, the first major assignment that was given was to create an idea for an animated film. Several ideas were considered, including the resurrection of a shoe shiner character from an old film that had been previously scrapped, but the idea that was settled upon was essentially "bringing the spring editorial illustration to life."

The film was officially announced on October 1, 2014 at the same time as True Identity, as both were being developed side-by-side. However, while True Identity was slated for an October 24, 2014 release (which it achieved), Alms Pouch was simply announced to have a summer 2015 release. At this time was when the film's storyboards were being completed, as the film itself wouldn't begin production until late January 2015, during Animation Production class.

As the film was being animated throughout the spring, it became apparent that the film would not be completely finished in time. Therefore, a move was made to prioritize the animation itself over the color, even though the backgrounds were already finished with full color.

The rough film, minus the color, was screened at the Pencil Mileage Club Film Festival in early May 2015 to positive reviews. While the film was not yet complete, audiences enjoyed the funny story that was also heart-felt.

However, the film was still in need of its color. At the beginning of the summer of 2015, July 10 was set as the release date, but as the date neared, it became apparent that the final touches could not be applied in time. Therefore, the film was delayed and released on August 21 only partially-colorized, with a promise to finish the film on a later date.

On September 16, 2018, it was officially announced that Alms Pouch would finally be completed for a re-release in, at the earliest, 2020. This special edition, titled Alms Pouch: Complete At Last!, finished coloring in the film, as well as cleaned up some of the animation, though the timing remains the same. The special edition is expected to be released by the end of 2020.

While audience retention has been low for this film, those who have seen the film have praised its story and characters, calling it heart-felt and funny. 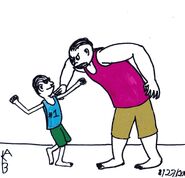 Retrieved from "https://mustache-maniacs-film-co.fandom.com/wiki/Alms_Pouch?oldid=7495"
Community content is available under CC-BY-SA unless otherwise noted.