Alpha Team: Mission Deep Jungle is Mustache Maniacs Film Co.'s first installment in its Alpha Team series of films. It takes place ten years after the official LEGO Alpha Team story line and is the fourth film in Project U.

"After Ten Years, They're Back!"

The movie opens at the end of the official LEGO Alpha Team story line, where Zed and Ogel face off in Antarctica. As the rest of the team races off to the mobile command center, Radia catches a glimpse of the battle, but is stopped by Arrow, who turns out to be a double agent working for Ogel. As Zed decimates the Scorpion Orb Launcher, a figure on a distant cliff shoots Arrow through the chest and runs off. Radia, trying to wrap her mind around what happened, is told by Zed that Ogel is dead. leaving Radia in even more shock.

Ten years later, Dash and the other agents return to their island headquarters, where he congratulates them on a job well done on their mission in France. Charge, who has the team's mail, finds a DVD resume that Flex inserts into the team's Blu-Ray player. They listen to Steve Kenlow's self-pitch, but before anyone can react, Cam rushes in with another DVD. This one is from U.N. delegate Henry Cainman, who insists that his daughter Whitney is lost with her boyfriend in the Amazon Rainforest. After running over the details, Dash requests that Cam, Radia, Crunch, Charge, and Flex come along.

In the rainforest, they scour the floor for any sign of the lost couple, but before they get far, the team is ambushed by a horde of bandits led by Mr. Cunningham. They take the team prisoner and take them back to their camp. In the meantime, Zed and Diamond Tooth get ready to leave Alpha Team HQ to inquire further into Steve.

Mr. Cunningham interrogates Dash on why Alpha Team is in the area, then accuses him of lying at every turn. With Mr. Cunningham's words, the team finds out that the couple are not in the area and that some workers were seen developing the jungle. Cunningham leaves the team chained up, but Flex reveals that the structure is so poorly built, they can easily escape. They all break free, but the commotion alerts the bandits. Dogs are released, and their attack causes the stilted hut to come crashing to the ground. However, Flex, who has already fired his rope at another stilted hut, causes it to crash to the ground. In the ensuing chaos, the bandits and team shoot at each other as Cam gets to the ATV. As the team escapes, the entire camp is reduced to splinters and Mr. Cunningham breaks his leg.

Meanwhile, Zed and Diamond Tooth discover that Whitney is in France and try to alert the rest of the team. Out of range for the on-board radio, Zed changes course and flies to South America.

The next day, Alpha Team encounters a patch of sand that Cam and Charge disregard. However, Flex insists that it's quicksand, which Cam quickly proves is right. Flex uses his rope to get Cam out, but this motion causes Cam's knee to fall into pain. Radia soothes the pain, then the team heads on.

However, they are stopped again by a paved road. They all hide as a truck approaches, and Cam fires a tracker beacon onto the supply truck. Charge, wanting to charge in, rolls underneath the truck and rides to its destination. Arriving at a jungle fortress, Charge sneaks out and rushes inside, finding himself in a movie studio. Looking around, he finds a script and a costume of Henry Cainman. Only then does he realize that the distress call was a trap. Back in the jungle, the rest of the team is captured by Ogel's drones.

Once in their cell, Ogel reveals himself to the team, showing that he survived Zed's missile, but lost his arm because of it. Taking Dash away, Ogel proceeds to tell him his evil plan: by faking the distress call, Ogel was able to capture Alpha Team so that they do not interfere with his plan to use a radar dish to emit the power of his orbs and take over the world. In the meantime, Charge finds the other agents and they escape their cell, grabbing new weapons on the way out.

Alone, Dash frees himself from the chair he's tied to and looks around for a way out. All he sees is the radar dish, smashes the window, and jumps out of the tower, grabbing the dish's stem. Dash orders the other agents to destroy the orbs. In the meantime, Ogel alerts the drones of the team's escape.

Inside the base, the agents find the orb factory and engage in a shootout with the drones. Flex formulates a plan to destroy the orbs and Charge assumes responsibility of delivering the explosives. Meanwhile, Dash is taunted by Ogel, who explains his backstory. Originally, he was a highly-prestigious scientist who was famed for his experiments, but was then ridiculed for over-reaching with the mind control orb. Stripped of his honors and fame, Ogel vowed one day to exact his revenge, with this being his revenge.

Charge is about to catch a satchel of explosives when someone else grabs them, leaps onto the orb chamber, throws in the satchel, and runs off. Crunch activates the explosives and the base blows up, throwing off Ogel. The agents and Ogel escape the base and head off into the jungle. Back at the airfield, Alpha Team discovers that Steve Kenlow was the mystery helper. His offer to join the team is accepted.

Deep in the jungle, Mr. Cunningham and his bandits wander through the jungle when they stumble upon Baron Typhonus. He heals Mr. Cunningham's leg and tells him to ally with Lord Sinister after pod 5 lands. The baron endows the bandits with Maelstrom power and is sucked into a Maelstrom vortex. Mr. Cunningham's men, now with purpose again, cheer as Alpha Team flies back to base.

The very first Alpha Team-based films created by Mustache Maniacs Film Co. were made in the pre-formation era of 2002-03, using the Steven Spielberg Movie Maker Set. While numerous, all of these films are now lost.

Despite this, the idea of creating a film based on LEGO's Alpha Team product line was always up as a potential film. In 2009, right before The Adventures of Legoman was released, an idea was put into place that would have had an Alpha Team film released that fall. However, because The Adventures of Legoman bombed and animation studio Brick Tales was shuttered, Alpha Team: The Movie was cancelled. It wouldn't be until 2012 that the theme would be pursued again as source material.

Around this time, Andrew Bermudez was working with College of the Canyons film instructor David Nordstrom to get Gone Ice Fishin' finished. During the class, Andrew also pitched a script that would adapt LEGO's Alpha Team product line for the modern day. David liked the idea and was very instrumental in fine-tuning the early versions of the script, which originally took place six years after Mission Deep Freeze.

The story stayed generally the same throughout production, with only minor changes being made. Originally, the Mission Deep Freeze opening was going to forgo the comic and instead have Dash narrate the events on-screen. But when the producers deemed the narration as killing the ambiance, the opening switched to the comic to indicate a continuation of the last Alpha Team comic from the January 2005 issue of LEGO Magazine. Throughout the script, the duration of different scenes was also altered to create a more even pace.

At one time, more time was going to be spent in Alpha Team HQ, with scenes that take place in the computer room and in the sick bay. A medic-in-training, Infra, was cut out early on as all of the action was moved to the briefing room. When this happened, a move was made to spend more time out in the Amazon rain forest. In the original script, Alpha Team lands and than immediately finds the road that leads to Ogel's base. Since this wasted potential for conflict in the jungle, a new sub-plot involving Mr. Cunningham from LEGO Adventurers was added to not only give hints about the film's plot twist, but also to tie the film into the rest of the cinematic universe.

The script was essentially finished by the end of 2012, but because Johnny Thunder and the Wisdom of the Ancients was in production at the time, this film was set back to 2015 for its release, mainly because that year was the tenth anniversary of the end of the LEGO Alpha Team product line. When Project U was given the green light in early 2013, this film was slightly tweaked and merged into the project as one of the twelve films.

The film was announced on February 21, 2014 at The Second Mustache Maniacs Film Co. Fan Choice Awards along with the rest of Project U. However, since work was still underway to complete Johnny Thunder and the Wisdom of the Ancients, this film started production late that same year, after filming ended for Attack of the Fifty-Foot Hamster.

Most of 2015 was spent filming the movie, but as the schedule began to fall behind, mostly because of Out of His Time and the DVD Archival Project, the release date was pushed from the summer to Christmas Day of 2015. Even then, the film was incomplete when the holidays began, so in an unusual release schedule, part 1 was released before filming had wrapped. Then, as they were completed, more parts would be released. This was finally achieved on April 8, 2016.

The film was highly praised upon its initial release, with some calling it one of Mustache Maniacs Film Co.'s best films. It maintained a steady viewership from one part to the next, never having any significant drop-off. Director Andrew Bermudez even considers the film to be on par with films like Johnny Thunder and the Secret of Marco Polo and New Friends ~ An Environmental Fable. 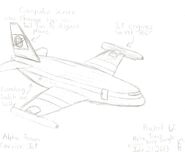