"So if you run into him, it's nice knowing you."

Babloo is an Indian boy and guide from Johnny Thunder and the Secret of Marco Polo. He guides the adventurers to the scorpion village and helps them on their adventure. He first appeared in the LEGO Adventurers sets.

Babloo has green legs, a blue torso with a jacket, a yellow sash, and a white shirt. His face features a cheerful expression, and large black eyes. However, he can be seen with a scared expression at times. He wears a red turban.

Babloo is a very cheerful, yet superstitious, Indian boy with a strong connection with the elephants he owns. He is also very cautious, trying not to take big risks, even if he has no choice. He is very knowledgeable of the jungle and is able to navigate it with ease.

Babloo first originated in 2003 as a character in the LEGO Orient Expedition set 7414 Elephant Caravan. There, he controls the elephant with his whip while Pippin Reed fends off Lord Sinister. In the India story arc of the Orient Expedition sets, Babloo guides the adventurers to the Scorpion Palace, though he has problems of his own to contend with.

In the said story-line, Babloo is a member of a tribal village that is being subjected to the rule of Maharaja Lallu, who tries to use Babloo to find the sunstone (a story element cut out of Johnny Thunder and the Secret of Marco Polo). When Dr. Kilroy finds the sunstone, he gives it to Babloo, who uses it to free his people.

Outside of the LEGO sets, Babloo has appeared on sticker sheets, stationary, and other promotional material for the Orient Expedition sets. He also makes a cameo on the LEGOLAND Windsor attraction Orient Expedition. 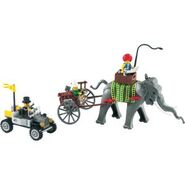 A poster for Johnny Thunder and the Secret of Marco Polo, featuring Babloo in the top left corner

Retrieved from "https://mustache-maniacs-film-co.fandom.com/wiki/Babloo?oldid=7253"
Community content is available under CC-BY-SA unless otherwise noted.