Baron Typhonus is the chaotic mastermind behind the Maelstrom and the main antagonist throughout Project U. He is cunning, manipulative, destructive, and chaotic, as he endlessly tries to destroy all creation. He originated in the massively multiplayer online game LEGO Universe.

Baron Typhonus dresses to match his title, with a long black cape covering his back and a tall collar sticking up behind his head. He wears a black aristocratic suit with white undershirt, maroon kerchief, and a gold chain. His top hat also represents his status, but is torn and tattered. On his face, he has black eyes, thin eyebrows, a thin mustache, and a short goatee. He carries a staff with a Maelstrom crystal mounted on top.

Baron Typhonus is chaotic and manipulative in thought, thinking that creativity can only flourish without any restrictions or rules. As the mastermind of the Maelstrom, he is almost infinitely powerful, commanding legions of stromlings that spread his power throughout any plains of reality that he comes into contact with. He has the power to control the Maelstrom, corrupt even the purest of hearts to spread fear and discontent, and cast illusions to deceive those around him. His only weaknesses are that he can only destroy and corrupt, rather than create, and that his power can only grow where the Maelstron is present.

Baron Typhonus started out as the main antagonist for the massively multiplayer online game LEGO Universe. In the game, it is explained that Baron Typhonus was once a tycoon and scholar that set out with Duke Exeter, Dr. Albert Overbuild, and Hael Storm to locate the imagination nexus. However, by the end of their journey, Baron Typhonus went mad, wanting to use the imagination nexus' power to create without limits. Upon doing so, he created the Maelstrom and was sucked into its field of energy, transformed into the Darkitect. Throughout the game, players smash his minions, the stromlings.

In addition to appearing in the game, he also appeared in the role-playing game Dino Attack: At War's End. There, he also appeared as the main antagonist who manipulated Dr. Rex into creating the mutant dinos. While he is the main villain in both games, neither allowed the players to attack him directly. 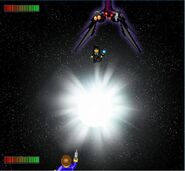 Baron Typhonus in LEGO Universe
Add a photo to this gallery

Retrieved from "https://mustache-maniacs-film-co.fandom.com/wiki/Baron_Typhonus?oldid=8003"
Community content is available under CC-BY-SA unless otherwise noted.