Billy Lugosi is the mad scientist in Forest of Fear who is obsessed with creating a monster. In earlier versions of the said film, he was the main antagonist.

Billy Lugosi has a toothy grin and wears big glasses over his red eyes. His hair is stark black and is cut into a flat top. He wears an old black and white lab coat stained with chemicals, wears black gloves, and sports black pants.

Billy Lugosi is an obsessive mad scientist who dreams of one day making the perfect creature. He was originally a member of the Bradford Rant Institute of Cosmic Kinesis, but left when his experiments to bring corpses back to life resulted in the hamster Black Bear growing fifty feet tall and destroying downtown LEGO City. He is narcissistic, thinking that everyone else is flawed in their low views of him, causing him to harass his assistant Igor. Because his creations usually cause destruction, he has no friends. 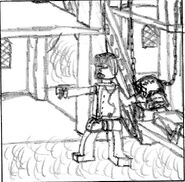 Billy Lugosi and Igor in Forest of Fear