"And God said, 'Let us make man in our image, according to our likeness. And let them rule over the fish of the sea, and over the birds of the sky, and over the cattle, and all over the Earth."
Father Juniper is the Catholic priest that accompanies the sailors on their expedition aboard the S.S. Comis in New Friends ~ An Environmental Fable. He is a strong leader in his faith, though he shows negligence for the destruction that the crew members are causing.

Father Juniper is a slim priest with long, maroon robes flowing down his thin build. A tan rope holds this robe in place at the waist. His underclothing is light tan in hue, covering most of his thin arms. His head is tall and thin, with his wrinkles and darkened eyes showing that his is slightly weathered. His eyes are small, in contrast to his more prominent nose and mouth. His head is topped with a maroon priestly head garment that is decorated with a tan cross. He carries a yellow scepter topped with a cross.

Father Juniper is a very religious man who leads the sailors in sermon and is a devout believer in the word of the gospel. He turns a blind eye towards the destruction that the sailors are causing, believing that their actions are through God's will. 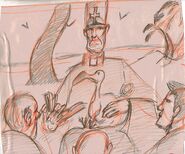