Frank Honey is a relatively minor character in the film A Friend of the Police and is a big fan of fellow officer Chase McCain. He has not appeared in any official LEGO sets, but did originally appear in the video game LEGO City Undercover, where he plays a major role.

Frank is an ever-smiling, simple-minded police officer who has a simple smile and eyes on his face, with no facial hair. His hair is a scraggly off-orange, just like that of his fellow officer Chase McCain (it is combed back in LEGO City Undercover). He wears a black standard-issue police uniform, with a dark blue version being worn in Project U.

Like a good version of Patrick, Frank Honey is a man of little intelligence who follows along with those around him. He is very clumsy, and is known to usually mistake one thing for something else, like mistaking a hornet's nest for a piñata, for example. He has the best intentions in mind, but usually ends up messing things up.

Frank Honey first appeared in the video game LEGO City Undercover as the first police officer Chase meets at the police station. He also shows Chase around the station and shows him where everything is. After that, he appears randomly throughout the game, greeting Chase and offering unnecessary help. He also has a crush on fellow officer Ellie Phillips. In LEGO City Undercover: The Chase Begins, he is working as an intern. He has not appeared in any LEGO sets.

Frank Honey talks to Chase McCain in A Friend of the Police. 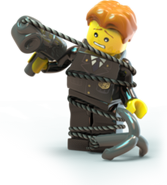 Frank Honey with a grappling gun in LEGO City Undercover 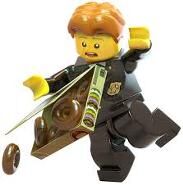 Frank Honey with a box of doughnuts in LEGO City Undercover