Harry Cane is a pilot character from the Johnny Thunder saga. He is very pessimistic, and is usually a source of ridicule from Pippin Reed Thunder. He first appeared in the LEGO Adventurers product line.

Harry Cane has similar facial features to Johnny Thunder, but with a thicker mustache, stubble, and a more relaxed mouth. He wears a brown aviator's helmet with black goggles, a brown flight jacket with brown belt and white lining, and black pants. Sometimes, he will wear a full black modern aviator's suit when flying one of his passenger planes.

Harry Cane is a very pessimistic aviator who is sure that something is bound to go wrong. He usually tries to get out of getting himself into trouble, with usually futile results. This can result in him being ridiculed by Johnny's wife, Pippin. However, he can also be overly brave when the other adventurers need him, as long as he can escape safely. In the past, he was a U.S. soldier in the Vietnam War.

Harry Cane started out as an aviator character in the LEGO Adventurers product line. There, he appeared in the theme's first two sub-themes, Egypt and Amazon, as a pilot for several different types of aircraft. He appeared in a total of ten sets, piloting aircraft including a bi-plane, a hot air balloon, a zeppelin, and a pontoon plane.

After 1999, he was never seen again in any sets, but did appear on some clothing, as well as the two puzzle books The Curse of the Mummy and The Lost Temple. He also appeared in several of Stephen Bishop's Adventurers-themed stories.

Harry Cane in Johnny Thunder and the Secret of Marco Polo

Harry Cane in Johnny Thunder and the Wisdom of the Ancients 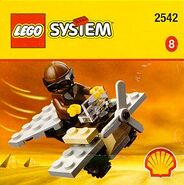 Retrieved from "https://mustache-maniacs-film-co.fandom.com/wiki/Harry_Cane?oldid=6005"
Community content is available under CC-BY-SA unless otherwise noted.