Johnny Thunder (also known as Jonathon Henry Thunder) is the hero of the Johnny Thunder films and the most popular minifigure character. He first appeared in 1998 as the star of LEGO's Adventurers sets. In the film series, he is married to World Magazine reporter Pippin Reed Thunder.

"By crikey! It's Lord Sinister and that bloody idiot!"

"Are you just another stereotypical villain after the treasure?"

Johnny Thunder's standard outfit features tan pants (they have been changed to black with brown boots) with cargo pockets and a tan button-up shirt with rope slung across it. He has a gun in his belt, a red scarf around his neck, and two pockets on the shirt's front. He has a thin mustache, a small goatee, and thick black hair. In all of his variations (except for his diving suit), he wears his father's slouch hat.

In his jungle outfit, his tan button-up shirt is swapped out for a green variation of the same design. The same is said for his winter outfit, except he wears a brown jacket with white fur lining. He also wears gloves in this outfit.

When he goes underwater, he wears a Deep Sea Salvage Crew diving suit, which is mostly gray, except for the visor, the sleeves, and the flippers, which are lime green. The suit also has silver pipes and a red Deep Sea Salvage Crew (sometimes called S.Q.U.I.D.) logo printed on the right pant leg.

When in Pamplona, he dresses as a mozo, wearing a red scarf around his neck with white garments. He has a black belt running around his waist.

Johnny Thunder is an archaeologist who is brave, resourceful, and never one to let his fellow adventurers down. He helps others in need and is always one to lend a helping hand, but can sometimes be too trusting. He always donates what he finds to museums around the world, unlike his arch-enemy Lord Sam Sinister.

Being the most popular minifigure character, Johnny Thunder has been represented in a wide variety of media around the globe.

The first Adventurers sets were released in 1998, which sent the explorers to Egypt to find the gem Re-gou before Slyboots and Mr. Hates (later to become Lord Sam Sinister). Over the next five years, Johnny Thunder went to a wide variety of locations around the world, including the Amazon and Dino Island. The last Adventurers sets came out in 2003, which sent Johnny, Pippin, and Dr. Kilroy to the Orient to find Marco Polo's Golden Dragon. However, Johnny Thunder made another set appearance in The LEGO Movie set Super Secret Police Dropship. He also appeared in two LEGO Studios sets: Temple of Gloom and Raptor Rumble Studio.

Johnny Thunder has appeared in eight video games, with variations to his design among them. He has played anything from a minor role to a starring role in LEGOLAND, LEGO Racers, LEGO Racers 2, LEGO Island 2, LEGO Stunt Rally, LEGO Soccer Mania, LEGO Universe, and The LEGO Movie Video Game. He also appeared in the online games Backlot, The Restless Mummy, and The Lost Treasure, along with some mini-games.

Johnny Thunder stars in the Lost Kingdom Adventure attraction at the LEGOLAND parks (sometimes called Laser Raiders or The Temple). He instructs the guests how to use their laser guns and tells them that they need to stop Lord Sinister and save Pippin. He has also appeared in Adventurers' Club and Journey to the Lost Temple at LEGOLAND California, River X-pedition at LEGOLAND Deuchsland, Dino Island at LEGOLAND Malaysia, and Orient Expedition at LEGOLAND Windsor. He will also occasionally appear as a meet-and-great character.

Johnny Thunder has appeared in the puzzle books The Curse of the Mummy and The Lost Temple, as well as the party game TreasureQuest. He has also appeared on a variety of clothing and other merchandise. He also makes a cameo in the Warner Bros. film The LEGO Movie.

Johnny in Johnny Thunder and the Wisdom of the Ancients 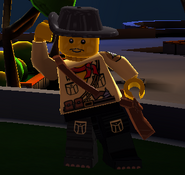 Johnny Thunder in set 1355 Temple of Gloom
Add a photo to this gallery
Retrieved from "https://mustache-maniacs-film-co.fandom.com/wiki/Johnny_Thunder?oldid=7958"
Community content is available under CC-BY-SA unless otherwise noted.