Johnny Thunder and the Gift of the Nile

Johnny Thunder and the Gift of the Nile

"Egypt Has One More Secret to Reveal."

The film begins with Dr. Kilroy, who is giving a lecture on the story of Ramses III's reign. As the story comes to life, the collected tribes of the Aegean, known as the Sea Peoples, descend on Egypt. In Egypt, Ramses III gathers his forces and stages two advances: first on land, then at sea. The counterattacks prove successful, but turmoil then develops at home. Tiy, a secondary queen, plots to destroy the pharaoh with magic, but is caught along with her accomplices. They are all tried and executed. Growing concerned over his prized treasure, the Heart of Osiris, he has new rooms built into Abu Simbel to hide the gem.

In the present day, Johnny Thunder, along with his wife Pippin Reed Thunder and daughter Sarah Thunder, visit the museum when they get interrupted by James Digalot. He directs them to Jim Carew's office, who talks about a letter he received from famed Egyptologist Hiram Aziz. The letter is urgent and encourages Johnny and his friends to come at once. Not wanting to miss out on an adventure, he calls up Dr. Kilroy and Harry Cane to meet them at the airport.

Meanwhile, in Siberia, Lord Sam Sinister, Patrick, and Horatio Schmidt descend on a weapons shop, relieved after being chased by Mao Zedong III. There they meet Sally Schmidt, Horatio's long-lost sister, and the shop's owner Vladnichuk. After some fussing, they buy out all of the weapons and mercenaries and Sally agrees to join Lord Sinister's gang.

At the airport, the adventurers meet Dr. Kilroy in the terminal and Harry out on the air field. Harry suits up for flight, then takes off into some air pockets, causing a suitcase to fall and knock Dr. Kilroy out. Once in Cairo, they head to the Windsor Hotel, where they will be spending the night. As they settle in, though, Lord Sinister's men, who happen to be there as well, listen to them through the ventilation.

The next day, they head to the Egyptian Museum, where they meet Dr. Hiram Aziz. He tells them about what he has found: on the mummy of Ramses III, he found a map leading to the Heart of Osiris, along with a legend of its supposed power to resurrect the dead. However, as they get ready to leave, black market dealer Slyboots attacks the museum. He gets away with the map and hops into a jeep parked out front. Using a bus, the adventurers pursue the jeep, but it gets away. At Cairo Tower, the adventurers find out that Lord Sinister knows about the Heart of Osiris.

The next day, the adventurers get onto a cruise ship and begin sailing up the Nile River. Ahead of them, Lord Sinister and his men talk about their plans. In Luxor, the adventurers stop at the Mummification Museum, where a preserver talks about a tablet that was found near Abu Simbel. Knowing it to be a clue to the Heart, Johnny takes a rubbing and departs. However, the preserver is actually working for Lord Sinister.

As the adventurers wake up at the Winter Palace Hotel, Lord Sinister and his men drive into town with the preserver, who is now dressed as a pirate. The adventurers spot them and flee to the dock. However, Lord Sinister and his men, by using their car boat, chase the cruise ship and get on board. The adventurers fight off the villains as Slyboots looks for the rubbing. He finds only a joke note, then shoots the preserver, accusing her of lying. The villains quickly leave.

In Aswan, the cruise ship reaches its last port, so the adventurers go into town to rent a airship. They use the airship to fly over the Aswan High Dam and across the desert to Abu Simbel, which Dr. Kilroy talks about in a lecture. Meanwhile at the villains' camp, a rift develops between Lord Sinister and Slyboots.

Once at Abu Simbel, the adventurers are ambushed by the villains, who shoot Pippin dead. Johnny and Sarah mourn her, but Slyboots breaks up the scene by betraying Lord Sinister. As the bandits and mercenaries fight, Johnny, Sarah, Hiram, and Harry escape to the temple. However, Lord Sinister, Patrick, Horatio, and Sally follow them in a jeep.

Inside the temple, Johnny and his friends uses the rubbing and other clues to help them find the way into the treasure room. Using their knowledge of Egyptian mythology, they are able to find the treasure. However, Lord Sinister steps forward and grabs the treasure. The door closes and Sarah throws a spider in Patrick's face. The adventurers hijack the jeep and escape through another passage. In an arrow trap, Horatio is killed.

Back out in the main chamber, the adventurers drive around the statues, trying to grab the Heart. At last, Johnny grabs it, but is stopped by Sally, who has rigged the entrance with explosives. Sarah shoots a stick of dynamite, causing Sally to blow up. The jeep leaves the temple, with Lord Sinister and Patrick hiding.

Outside, the police have arrested the thieves, mercenaries, and Slyboots. They all feel sad about Pippin, but Sarah brings out the Heart of Osiris, hoping the legend is true. It does nothing, but Dr. Kilroy suggests wiping Pippin's blood on the heart. She does so, and Pippin is revived. She is well and whole, and the adventurers fly back to Cairo. Down on the river, Lord Sinister and Patrick sail away in a boat piloted by a mercenary.

Before Johnny Thunder and the Secret of Marco Polo was even released, plans were already in the works for a "Johnny Thunder 2" that would follow the first film: the problem was deciding where it should be set. Then, on September 1, 2007, on the website www.adventurers.dk, survey results indicated that the most popular sub-theme of Adventurers is the original Egypt line, with 125 votes out of 289. With this fact in mind, the film was set in Egypt, with some changes to the concepts to avoid making the film cliched. Pharaoh Hotep was the first character to go, as director Andrew Bermudez did not want a living mummy in the film. However, as a tribute to the past, several ideas from the never-released Johnny Thunder and the Curse of the Mummy were added into the film, such as the falling suitcase.

Originally, the film was going to be called Johnny Thunder and the Keys to Power, in which the adventurers would be looking for an ancient super weapon. In this version, the Russians would have been their own faction, taking direct queues from Indiana Jones and the Kingdom of the Crystal Skull. Early on, this concept was dropped when the story of Ramses III was found. The resulting script became Johnny Thunder and the Jewel of the Nile.

The film, re-titled as Johnny Thunder and the Gift of the Nile, was announced on June 7, 2009, which also saw the release of the film's first teaser. However, the story was far from polished. Originally, the Cairo Tower scene was going to feature a boxer who was going to beat up Johnny, but he was dropped for being too contrived. Various moments of banter between the characters was also chopped out to shorten the running time.

Filming started July 31, 2009 and ended on April 5, 2010 with few mishaps, the most notable being problems to the studio mainframe's hard drive. Editing also proceeded with few problems. To promote the film, the Christmas special A Very Patrick Christmas was released on December 9, 2009.

The film debuted on July 16, 2010 to mostly positive reviews. However, many viewers criticized the film for being too short and being too simple when compared to Johnny Thunder and the Secret of Marco Polo. Regardless, it has received the strongest opening weekend of any Mustache Maniacs Film Co. film and continues to be popular.

This popularity, coupled with advances in technology, spurred a project to create a special edition for this film, released on July 16, 2020, the film's tenth anniversary. The re-release replaces all of the music with a new soundtrack, adds new special effects, and restores a deleted scene.

Johnny Thunder and the Gift of the Nile contains examples of the following tropes.

A spider crawls on Patrick

Pippin aboard the cruise ship

Pippin at the Egyptian Museum 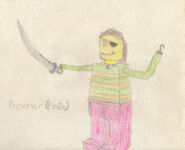