Juniper is the main antagonist from the never-released animated film The Hit Man. He was designed from a pattern of wood grain and was altered later to make him look ghoulish.

"Good. I need you to do something."

Juniper's silhouette is comprised of wavy contour lines that round out his form, which atomically defies natural properties in places. His pants and shoes are white, as is his ghostly skin. His jacket is pitch black, except for the sleeves, which are dark gray. His eyes are blood red.

Juniper is a hit man for hire who also passes his time by maintaining his prized car. Anyone who dares defile his car always feels the extent of his wrath, such as Tim. He always resolves any conflicts with violence, preferring to shoot first and ask questions later, if he even thinks to ask questions. 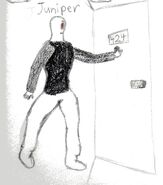