Start a Wiki
Lance Spears is an adventurous diver who is the love interest of Sarah Thunder. He loves action, but gets easily scared over minuscule things. He first appeared in the LEGO Atlantis sets as the first mate of the Deep Sea Salvage Crew.

On his many adventures with Johnny Thunder, he wears a light blue vacation shirt featuring a picture of a sunset and dark blue pants. He has stubble on his chin and cheeks and dark orange hair and eyebrows. Alternatively, in Pamplona, Spain, he wears a red sweater with the Classic Space logo on it over his shirt.

Lance Spears is the boyfriend of Sarah Thunder and tries to be romantic towards her. This usually is to no avail, since he doesn't understand women that well. He is also a loud snorer, easily scared, and a little scruffy, sometimes making him a source of ridicule from Harry Cane. He also easily gets bored and hated school. Before dating Sarah, he was the first mate of the Deep Sea Salvage Crew.

Lance Spears first appeared in 2010 in LEGO's Atlantis product line as the first mate of the Deep Sea Salvage Crew. He is usually a source of annoyance for Captain Ace Speedman and sleeps a lot. Soon after in LEGO Atlantis: The Movie, he appears, playing the same role he plays in the sets. According to the film, he is also "an expert in anything that goes boom."

In 2011, he appeared in the video game LEGO Battles: Ninjago, acting as a hero unit, along with the final wave of Atlantis sets. In this wave, he only appeared in one set: 7976 Ocean Speeder. He also appears on the Atlantis Submarine Voyage attraction as a diver exploring the underwater environment.

Lance Spears in Wonders of Buoyancy.

Lance Spears in Johnny Thunder and the Wisdom of the Ancients. 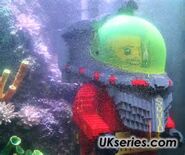 Lance Spears as he appears on the Atlantis Submarine Voyage attraction.
Add a photo to this gallery

Retrieved from "https://mustache-maniacs-film-co.fandom.com/wiki/Lance_Spears?oldid=6907"
Community content is available under CC-BY-SA unless otherwise noted.