"You can't get rid of me that easily!"

Ogel wears an all-black suit fitted with futuristic shoulder armor, life support controls (after the prologue for Alpha Team: Mission Deep Jungle), and a robotic arm replacing his left arm (also after the said prologue). During the prologue, his suit is all black and a light trans blue hook replaces his left hand. In either variation, he wears a black helmet with a shiny gold visor. His face is wrinkled, with an arching brow ridge, thick eyebrows, thin mouth, and dark eyes. His right eye is missing, instead being replaced by a red robotic eye.

Ogel is a megalomaniac who wishes for nothing else than to take over the world. Originally, he was a scientist at New Silicon Systems research center, but was fired when his ideas and experiments were deemed too radical. Now wishing to exact his revenge by making them his slaves, he uses his experiments to create giant animal-like vehicles and to mutate people into his workforce, known as drones. Only Dash Justice and the Alpha Team have dared to oppose him.

Just like some other canon immigrants, Ogel started out as a video game character, starring as the main villain in 2000's LEGO Alpha Team. There, he never fought any of the Alpha Team agents, but would rather stand high above, taunting them with his wit and wry sense of humor.

A year later, he appeared in two sets: 6771 Ogel Command Striker and 6776 Ogel Control Center. He was also featured in a series of LEGO Magazine comics, including a starring role as the villain in that year's holiday cross-over comic. Between 2001 and 2004, he appeared in a total of six sets.

Beyond the sets, he appeared in the comic adventures Evil Music and Into the Deep, along with Alpha Team comics, LEGO.com splash page images, and the fan-created role-playing game Dino Attack: At War's End. He was going to make a cameo in LEGO Universe, but was cut out when the game's servers were shut down. 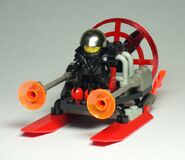 Artwork of Ogel at the beach