The film opens with a gas station attendant named Jack who finds a one hundred dollar bill on the ground. He hesitates, but picks up the bill. To his surprise, a clown jumps out and insists that Jack is going to steal the money. Jack retorts that he is just going to put it in the lost and found bin in the convenience store. He does this and forgets about the money.

Later that day, the bum from The Citizen of the Year enters the store, asking Jack if he's seen his one hundred dollar bill. Jack, thinking what he could buy with the money, lies and says that he hasn't seen it. Just then, the clown returns, calling Jack a liar and crook. Jack, wanting the clown to shut up, punches him in the face. However, the clown points to a security camera that caught all of the action. The bum is lost on what is going on.

At this point, the script is left unfinished. It is unknown how the film would have ended, but it is presumed that Jack, having learned a lesson in self-discipline and morality, loses his job.

After the failure to make an entry for Darkness and Light, Mustache Maniacs Film Co. wanted to pursue another contest for potential story material. In late August, a contest was teased with a short video showcasing an avalanche of parrots and a cult with Mr. Balser at the helm. On September 1, this contest was revealed to be Septemberfest: The Citizen of the Year Lives!. The contest was all about making a film that takes place in the world of The Citizen of the Year.

However, because of the then-recently created policies regarding film announcements, One Hundred Dollars had to be written and developed without any prior notice online. For several days, a short script was created that was loosely inspired by the film's atmosphere and visual irony. Alongside this writing, the community of Paradisa Bluff was envisioned as an ironically seedy and dark community, in order to prepare The Citizen of the Year for entering the official canon.

However, many blame the story's over-wrought nature for being the project's downfall. Many have said that the story ended up becoming too deep and too grim for a contest that was irreverent and slapstick in nature, and even Andrew Bermudez had to stop writing it because the whole idea had, in his view, gone out of control.

With Alpha Team: Mission Deep Jungle in need of attention, this film was finally abandoned by the end of September. However, as this film was never announced, Mustache Maniacs Film Co. had the luxury of not having to cancel yet another film publicly. Five years later, an entry for Septemberfest 2020, titled The Employee of the Month, would follow in the same vein as this film. 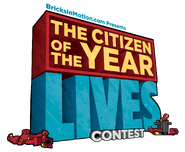 The contest logo for "The Citizen of the Year Lives"