"Let's just say that I gave the guards some aggressive head massages."

"But think of all of the money you could get from selling the Heart of Osiris."

Slyboots is an accomplice to Lord Sam Sinister in Johnny Thunder and the Gift of the Nile. He is an influential leader in the Egyptian Black Market and always works to make a profit. He first appeared as the main antagonist in the 1998 LEGO Adventurers sets.

Slyboots is a clever businessman, with round glasses, fine beard, and thin mustache on his face. He wears black from head to toe, with a black top hat upon his head. His fine dress suit is black with a red button-up undershirt and he wears black pants.

Slyboots is a former prizefighter and shrewd businessman who has great influence in the Egyptian Black Market. Leading a band of masked bandits, he steals treasure and artifacts from ancient burial sites, only to then turn around and sell his loot to tourists for a premium price. He has constantly been a hassle for men like Hiram Aziz.

Slyboots started out as the main antagonist in the 1998 LEGO Adventurers sets, where he worked with his then-sidekick Baron Von Barron (originally, Slyboots was named Sam Sinister, at least in North America, usually). Around the same time, he also appeared in the puzzle storybook The Curse of the Mummy as a tomb robber. During the duration of the theme, he only appeared in five sets.

After he took his final product bow, he went on to appear in LEGO Racers, LEGO Racers 2, and Soccer Mania. He also appeared on select Adventurers merchandise, such as the game TreasureQuest, clothing, and more. 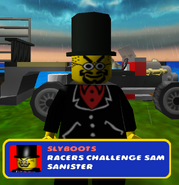 Slyboots in set 5938 Oasis Ambush
Add a photo to this gallery
Retrieved from "https://mustache-maniacs-film-co.fandom.com/wiki/Slyboots?oldid=7421"
Community content is available under CC-BY-SA unless otherwise noted.