U.S.O. Club is the main location of action in the play Kilroy Was Here!. It is a recreational facility in Brooklyn where characters like Private Joe Kilroy can hang out and is a part of the real-life United Services Organizations.

Formerly a clock shop, the building became a U.S.O. Club in 1941, right when the organization was founded. However, as the club is only 1 year old in the play, no other details exist on the club's history.

The following characters are commonly found in the U.S.O. Club.

The U.S.O. Club is used as the main setting for the action that takes place in the play Kilroy Was Here!, but U.S.O. clubs have existed long before the play was even written.

The United Service Organizations, which operated the clubs, is a real-life nonprofit organization that engages in giving U.S. troops on leave a way to relax and recover. The organization, founded in 1941, created the U.S.O. Clubs inside of re-purposed facilities, like log cabins, museums, churches, and other buildings. They would provide activities such as dancing and movie screenings. 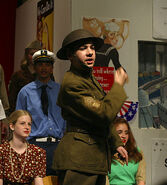